The iKlip 2 - simple yet very useful! 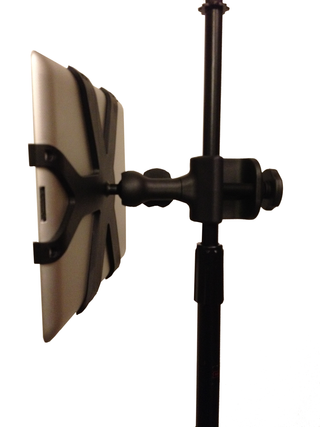 (See here for the IK Multimedia site and details of the iKlip 2: http://www.ikmultimedia.com/products/iklip2/ )

It's a very simple device but oh so useful!

If you want to position an iPad at a given angle for whatever reason, the iKlip 2 holds it sturdily and gently but firmly in position on a rotating ball joint. The iPad slides very slickly into the clasps which are just tight enough to hold things steady but not so tight they scratch the device. The whole unit then attaches to a mic stand - or any other support that can be contained within the screw clasp at the back. There is no slippage of the ball joint - and one does not have to do it up so tightly that it feels like it will break to achieve that.

MusicInclusive purchased the iKlip 2 to position a second iPad for recording and for easy placement and access when not situated on an already crowded recording desk. It's great for that - but I also discovered a second use... Have you ever wanted to lie down on a couch (many studio's have couches!) and read something on an iPad - like a synth technical manual, or a mic spec sheet - without bending your neck or having the iPad sit at an awkward angle? It's great for that too! One can position the iPad facing down (i.e. with the front facing toward the floor) without fear of it falling out, and look up at it from a prone position. How about recording video or a picture using the iPad camera at some unusual angle while holding it steady? Perfect! 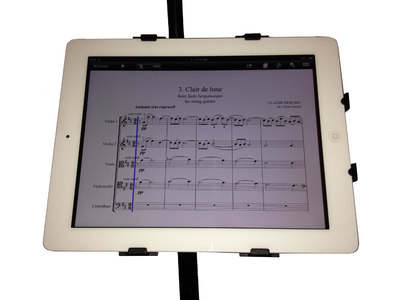 Of course, you can also use it for all the IK Multimedia suggested reasons - like reading sheet music - or controlling an iPad stomp box or other recording app, but the extra uses I've outlined make it additionally worth the price. Admittedly I did use up some Jam points to lower the cost - but even so - even at full cost, it's the sort of purchase that you might debate over for quite a while and then wonder why you didn't buy it before. I know I did.

The iKlip seems at first glance like a piece of equipment that might appear redundant. After all - you can set an iPad on a desk - and with a suitable case, place it at several different angles. But the flexibility of the iKlip to position an iPad just where you want it, at whatever height (when attached to an appropriate mic stand of course), at whatever angle you need without having to precariously balance your expensive investment awkwardly, makes it worthwhile. (Note: I did not try it hanging from a boom - only attached to the upright part of the stand - so YMMV if you were to attempt using it from a boom).

The one small downside is that you have to remove any existing case to use an iPad in the iKlip 2. But - for the utility gained it's a small price to pay.

A purchase that MusicInclusive is pleased to have made and recommends if you have any need to place your iPad anywhere but on a desk or hold it in your hands.

(iKlip™ is a trademark property of IK Multimedia Production Srl.)