I've been experimenting a bit with 4Pockets' Stompbox since they added stereo pass through on the input channels. Very nice! I recorded the very short classical / acoustic noodle below as a test using an RP255 pedal on the Acoustic setting (adjusted), via USB directly into an Apple Camera Connection Kit with 30-pin to lightning adapter straight into an iPad mini 16 (original). The Guitar used was an Ibanez GA5TCE shown below.

The pedal was set to have some small stereo ping pong delay, which is passed through in stereo perfectly via Stompbox now, and a small amount of reverb. The SB app was first set to clean, then - after a short delay in the wav file, you'll hear I added Chorus in the SB app. The result was recorded into Cubasis via Audiobus.

It's perfectly understandable that an amp app would normally only take a mono signal - guitar output is usually a mono signal - but - it's not the only use case, and being able to feed stereo output not only from pedals that produce stereo, as noted above, but from synthesizers or other apps into Stompbox in the FX slot in Audiobus makes such apps all the more valuable on an iPad of course for more than just guitarists.

Something I should also mention - one advantage of using a pedal like the RP255 via USB is that you get the direct digital output from the pedal direct into the iPad - no A/D conversion. There are other digital / HD guitar interfaces that work this way too for iPads, but I happen to already have Digitech Pedals, and hence can already make use of their built in amp and FX modeling to augment what I might want to do with further processing in the iPad. 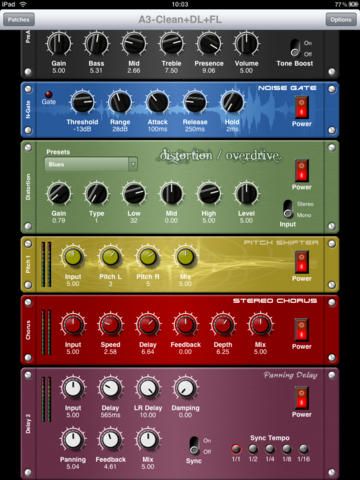