Two items from iConfig of interest...

iDevice speaker/jack audio while connected to the iConnectMIDI4+

And that is… if you disable the iOS device audio out in the iConfig settings you will get audio coming out of your iPad speakers or jack connection rather than the audio being directed via the digital audio interface to the iConnectMIDI device. Here's a picture from the the iConfig application for the iConnectMIDI4+ that illustrates where one does that: 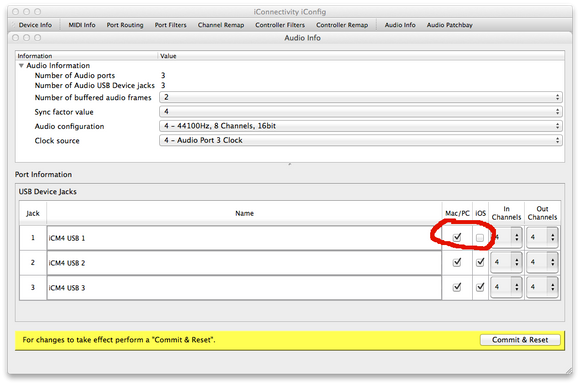 Part of the reason I hadn't tried doing that before was that I actually wanted to have the audio only ever go via the digital interface, but as the conversations have been multiplying about use cases in various forums and groups, this has come up several times and I thought to try it as a result of Zymos' suggestion. Thank you Zymos! :-)

Also wanted to briefly illustrate the use of the host port with an external powered USB hub for more than just keyboards. In the following screenshot from iConfig, you'll see that I have a CME XKey 25, a Korg MS-20ic, and an Axiom Pro 61 keyboard connected via an external hub to the USB host port. Note in the Name column that you can set aliases for the device names which makes it easier to figure out which MIDI device you are directing where in the port routing elsewhere in iConfig. 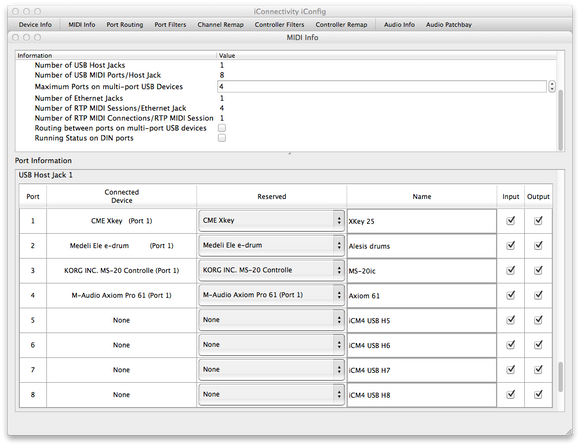 BUT! that's not all, - notice anything else? ;-) I have also added into the hub that is connected to the host port, an Alesis electronic drum set. It's class compliant as it happens, so it shows up here just fine. Using this, you can drive any number of drum applications on an iPad (or Mac or PC), that respond to the standard MIDI drum notes. That's very cool too!